It’s only been a FUCKING MONTH since I found out that the right, rear upper control arm on my GBS Zero kit was in no way going to line up and go into it’s home...but it’s on the goddamn car now an barring something really fucky happening it’s not going to have to come off ever again. 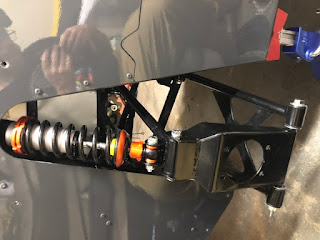 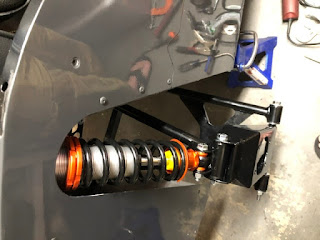 It took most of the day to wrestle it onto the car, including a protracted run to the hardware store to pickup up some new, shorter M10x1.50x60 bolts for the upper and lower shock bolts. (For both sides of the car.) The hardware that GBS ships with their ATR shocks is M10.x1.50x70...and those are too long. On the upper mounts they interfere with the frame so you’re not actually able to tight them down snugly.  On the bottom mounts the excessive length isn’t such a problem but since I’m replacing some I might as well replace them all.

My only significant frustrations in this build [so far] have been the horrible quality of the front brake tube nuts and working with GBS to sort out the rear control arm issue. Getting GBS on the phone to talk through the issue was practically impossible. Ultimately the issue was sorted out in a few quick emails but my experience has been that it is almost impossible to get phone support from GBS. (From the US, at least.) I’m honestly deeply disappointed that it took nearly a month to get the control arm issue sorted out. It put a damper on my build enthusiasm with back-of-my head concern that potentially the frame might have had issues.