Spent a little bit of time after work last night offering up the AIM MXS dash to the carbon fibre dashboard. Also, the dash lights. (Was going to do something fancy for those, turns out I didn't care enough and just set them straight into the dash.)  To make sure that holes were [mostly] in the right place I drew up a couple of templates with Fusion 360 and kicked them out on my Ender3 Printer. (I mostly use my 3D printer to knock out single use tooling, like this.)
I'm happy enough with the end result of the work even though it's a bit of a horror show where I cut out the 2" rounds to fit the back protrusion of the dashboard. Doesn't matter, tho, that's covered by the dash itself.  And one of the dash lights is slight offset which will forever be a tiny annoyance.
By ショーン at May 18, 2021 No comments:

Ran into some issues trying to finally get the engine to turn over that turned out to be an ECU configuration problem that was partially user error and partially some questionable choices made by Emerald M3D on how they package and sell their ECUs.

When attempting to crank the engine over it wouldn't catch or run.  Probing with a multimeter revealed that fuel rail and coils weren't getting power, ECU logs also suggested that the ECU wasn't getting power to its second 12V in, either.

While it was pretty clear that the issue was that the ECU wasn't triggering the Main Relay to supply the injectors, ignition, or the ECU with battery volts, figuring out why was a bigger pain in the butt than it should have been.  I traced the Main relay back to pin 14 on the ECU which all of the documentation I could find on the K6 ECU lists as supplying +8v for sensors, not switching ground.  Weird but workable...except that the GBS harness is wired for the ECU to switch pin 14 to ground, not to supply 8v.
I thought I might have to rewire the chassis harness to so the Main Relay would be triggered by a positive source from the ECU or that I might need to move the ECU pin to a different port.  But I couldn't find any option at all in the configuration software to actually set where the main relay is triggered from.  The documentation seemed to suggest that it would be triggered from Pin 4 as long as Pin 4 wasn't configured as an ignition driver but offered no alternatives.  And pin 4 on my setup is an ignition driver.
To make what could be a very long story short, I got in touch with Emerald and quickly discovered two problems:

I was bitten by the very reasonable assumption that the software available on Emerald's site would be the most current version and would be able to configure all versions of the K6 ECU that they ship to customers.  Shipping bespoke versions of software for specific versions of an ECU is kinda crap.  I have to be careful now not to lose the installer.  It's also very likely because of the bespoke nature of both the ECU and the configuration software that there will NEVER be firmware or software updates for my specific K6 ECU or the configuration software needed to make it work.
It also means that when I take the car in to be tuned I'm going to have to make sure that my tuner has the special, bespoke version of the tuning software on his laptop.
Those aren't show-stopping issues but they are annoying.
However, the car stared right up and just ran after finally getting the ECU outputs correctly matching the reality of the chassis and engine harness configuration so that's not annoying.
In the future I may change the car over to a different ECU, maybe Megasquirt or Haltech, but for now I'm gonna go with what I got 'cause it runs.
By ショーン at May 15, 2021 No comments:

It's been a bit of time since I've made an update here and it's time to do some brain dumping, starting with some fluids.

The car is now presently full of fluids. Let's talk about them.

The LED flasher that I bought was garbage, I updated my previous post with that information.  I've replaced it with a more expensive electronic flasher that shouldn't suffer from the terrible electro mechanical issues the one I first bought has.

The new LED Flasher (FL3-RED-K) is a three pin flasher but the GBS Zero's flasher socket will need to be re-pinned. The short story is that the GBS is pinned for ISO relays, FL3-RED-K relay that I purchased is pinned as a JSO relay. Research into that what you will but the following diagram should help on that.

Basically, looking at the back of the Relay Socket everything needs to rotate one tab clockwise. 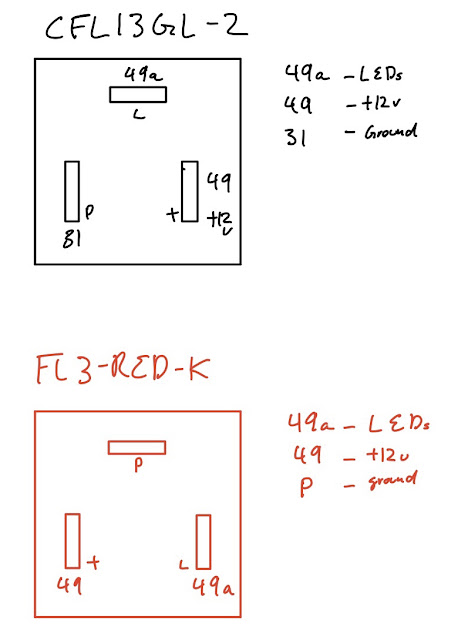 I have learned through trial and error that the oil pressure switch use in the Ford Fusion that my engine came from is not compatible with the way that the GBS's wiring harness.

UPDATE: I chose Solution 1 however that introduced another issue that required me to swap out the switch connector housing. Making a long story short, you want a WVE Vehicle Electronics 1P1883 connector pig-tail kit. De-pin/swap connectors or cut and splice, whichever method floats your boat. (I de-pinned 'cause that's how I roll.)

I'm going to go with the Summit Technologies HAWK Array rather than rolling my own. It's less expensive and would look better than what I would build for my own usage.

For the purpose of testing my car's electrics I built a prototype indicator array. It half worked. I sunk all of the LED cathodes to a common chassis ground because I made bad assumptions.

What indicators sink to what, briefly.

Reading it that way is a little confusing if you've not fully grasped that some things within the car are ground switched. I had the boys down in R&D whip up this janky diagram to help better illustrate the point. (Brown lines are ground/sinks) 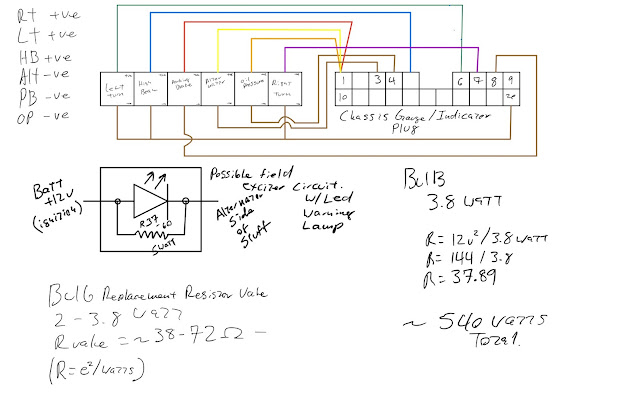 How does the HAWK Array work in this configuration?

What the other stuff about bulbs, watts, and field exciter circuits?

Depending, I may need to build a circuit that will excite the alternator so that it'll produce power at idle. It's a fairly simple circuit, especially if you're using an incandescent bulb. If you're using an LED, well, they offer little forward resistance so they might not excite the alternator and you need to bridge a resistor that will simulate the load of a 2-4 watt bulb. (@12V)  I might need to do this with the HAWK array, but I'm not 100% sure on that right now.
By ショーン at February 26, 2021 No comments: