To stuff the engine and transmission package into the GBS some trimming needs to happen.  Specifically, few mounting tabs and part of the bell housing have to go away.  This is particular to the Ford Duratec to NC Miata/MX-5 gear boxes.

On stock cars with stock oil pans the lower bell housing bolts thread into the pan. When using a low-profile sump the lip of the bell housing extends lower than the oil sump by about an inch and a half.  Best just to trim it off rather than catch a rock or a curb

The job is pretty straight forward, you just need to slice it off clean across the bottom just under the wall of the bell housing where it spiders out into webbing for the bell housing’s flange.  A straight edge works great, a sharpie is good for marking out what you want to cut vs what you souls to cut.  Then it’s just a matter of going at it in bits and pieces with an angle grinder.  It took a bit of work and swearing to make it happen but it happened. 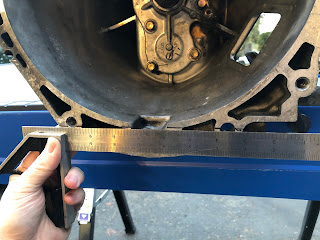 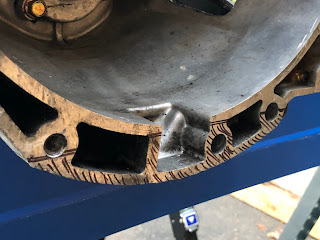 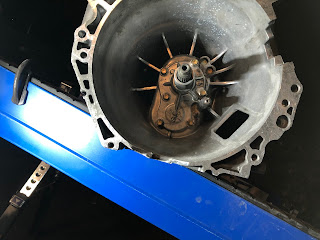